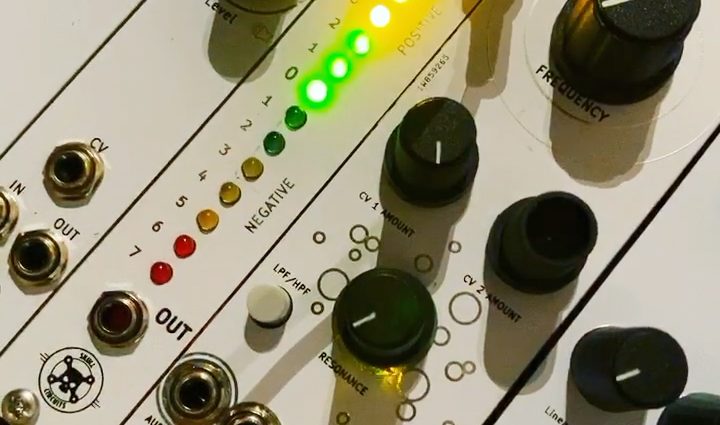 By: Skull
In: eurorack, Utilities

We don’t often like to admit it, but we all like the blinking lights in our studio. I don’t use many leds in my modules, only when I feel it would add something to the usability, but this one is all about the fancy lights (also this is posted close to Christmas, so that might have something to do with it.)

I needed wanted a simple way to visualise a signal. Currently I don’t really have a way to do this unless I hook up the scope, which is all a bit clunky. I know there are ‘scope’ modules out there, but they’re expensive. Although the are arguably cooler, a simple VU-style meter seems more as enough in most circumstances.

The main problem this module is designed for is to answer the following question: ‘why the fuck is there no sound, what’s happening?’ A question we all have encountered on several occasions. Closely followed by ‘why the fuck is this not doing what I want it to do?’. A simple voltage meter is the excellent choice in answering those questions on most occasions.

Rather then using something like an LM3194 which is a dedicated VU meter IC, I opted for an approach based on comparators. Mainly because my preferred component supplier doesn’t carry the LM3194, I don’t know if they’re still in production either. Also, if you want leds to light up at specific values, a comparator based approach seemed easier.

I’ve set up 7 leds on the positive side and 7 on the negative side. They’re identical, but the negative side operates on an inverted signal. There are other ways to do it, but this is how I did it, so there’s that. Why 7, because it’s a prime number ¯\_(ツ)_/¯ , but mostly because it fitted easily on the PCB and I could use 1V per led increments and display signals between +7/-7Volts, which covers the majority of signals you’ll find in a modular. There are few CV signals which go beyond 7V.

I’ve chosen a simple voltage divider as a way to build the reference voltage (+7V). You can find a more reliable way to build a voltage reference, but given there is a 1V gap between each led, that much precision isn’t really needed. A simple trim-pot also has the advantage that you could use a different reference voltage if you’d want to, like 5V for example.

The schematic states a 1K resistor for the leds, which is perfectly fine. However, I prefer a 2.2K resistor because that makes the leds less bright. So, go for whatever you like.

Any opamp will do as a comparator. No need to put in fancy expensive ones, I used TL084’s since they’re a bit cheaper then the TL074 series. A TL064 would do as well if you’re concerned about the power consumption of the circuit. Which is, due to all the leds, quite high for a simple module like this.