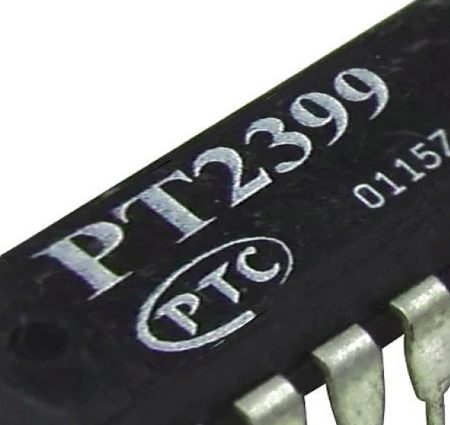 This one has been in my own rack for a long time already. At the time I hadn’t taken the habit of writing my schematics down consistently. But last week the power got plugged in backwards, which, obviously fried a bunch of stuff. Since I was already taking it apart for repair, it seemed like the ideal occasion to note down the schematics.

If you go looking for delays in the DIY world you will, without a doubt, stumble upon the PT2399 IC and its various implementations in guitar pedals of all kinds. The PT2399 is a single chip echo designed for toys, karaoke mixers and the likes. While that doesn’t sound promising to begin with, It’s also the delay used in the Korg Monotron or so I have been told.

It’s a digital effect, let there be no doubt about that. It has 44Kbit of internal memory and can handle delay times of 342ms according to the data sheet. It achieves this by lowering the sample rate dynamically. That way it can squeeze out relatively long delay times from a tiny amount of ram. As a consequence of this method the quality goes down as the delay time gets longer. One can go beyond the maximum time indicated in the data sheet, but it gets really gnarly there. Nice.

For the digitally illiterate: A sample rate is the rate at which a signal is digitalised. Faster rates = better quality = more samples = more memory needed. Nyquist theorem – just google it – states that a sample rate should be at least twice the maximum sampled frequency in order to be able to reproduce said frequency.

But it has its upsides as well. Because it uses a dynamic sample rate you can fluidly change delay times resulting in those liquid pitch up/down effects so typical for analog delays, rather then the clicking you encounter on many digital ones. It’s actually the only reason why this chip is worth to get looked at. Apart from it being cheap that is.

But nevertheless, even if you like the lofi-goodness, the useful delay time is still severely limited. To overcome this problem I’ve put 3 of them in, one after the other. This allows for a wider usable range of delay times. Not surprisingly, 3 times longer. This also means my audio signal goes through the, rather poor, ADC and DAC of the IC 3 times. But the net profit is still there. The signal comes out way better using 3 IC’s with a shortish delay then 1 with a long delay time and you can get a usable delay of around a second which makes it far more useful. I’ve added a switch so I could switch between a 3 IC configuration and a 1 IC configuration should those short twangy delays be required.

I’m always saying delay, but it’s actually an echo chip. What it does is delay the incoming signal by a certain amount. That’s all. To get an actual delay effect you have to feed the delayed output back into the input (but a little quieter preferably). You can keep doing that until the signal has degraded to mush by the constant AD DA conversion. However, that feedback loop is the ideal place to pop in some signal modifications like a simple EQ, so you can have those sweet dub delay effects where not all frequencies die out equally.

The PT2399 only works on 5V. This isn’t a real problem when it comes to supplying the voltage. A 5V regulator is easy enough. It does however pose an issue with the incoming audio, which is way too hot so it has to be toned down at input and has to be amplified on output. I haven’t noticed any issues with the IC getting a hot signal to it’s input other then that it clips, it doesn’t seem to catch on fire or blow up in any way. But better be safe then sorry and at least implement some hi-pass filtering and peak led indication to prevent it from being slammed with 12V DC if something goes wrong.

As you see. It’s not ‘that’ of a complex schematic. The 3 PT2399 IC’s are the ones with the most components. Apart from those, there is no weird stuff going on.

What I haven,’t been able to do is tempo-sync the delay time to an incoming clock. The only way I have come up with to do this is to take the VCO out of the PT2399 (which is the sample rate), feed that to something like an Arduino. Give that Arduino a clock input as well and let it work out how to match one to the other and drive the PT2399’s timing resistor accordingly. It’s a shitton of work and I’m not familiar enough with the Arduino platform to attempt this kind of trickery. If someone feels up to the task, drop me a line. An analog solution with a PPL could work as well, but that would probably be even harder to implement.

Also, a way to insert other modules in the delay line would have been nice. I haven’t implemented it though because of the voltage differences in the audio signal. It would require you to boost the signal up again to modular levels and then tone it down again when it comes back in. As it is, the signal gets butchered quite enough already, so needlessly adding more noise isn’t something I would like to do. If it were a better delay chip though…

In addition to that, it’s already possible for the feedback to get out of control due to the EQ which allows you to boost as well as cut. This may cause the feedback signal to be louder then the incoming signal, causing it to grow even louder with every repetition. 2 hard clipping diodes are put into the feedback loop to make the clipping at least a bit less nasty, but you run out of headroom quite quickly.

The PT2399 isn’t an IC that’s ready for a ‘real’ delay. It’s fun in it’s lo-fi way and certainly of use in a modular system but it won’t replace more serious delay units. But if you’re in for some wobbly gobbly lo-fi delay madness, it fits the bill quite well.