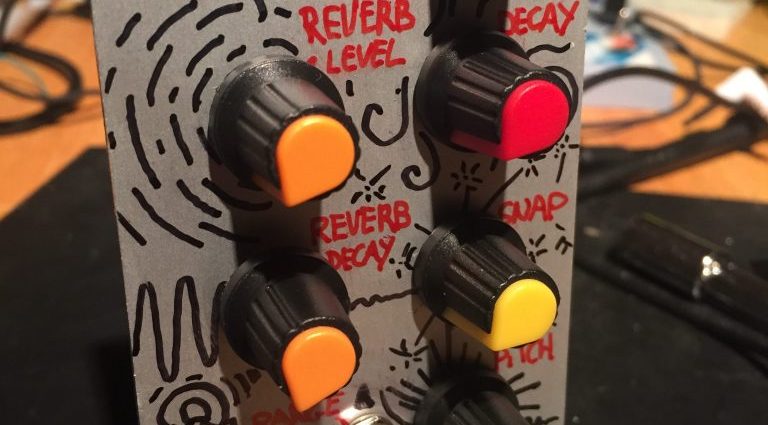 I always wanted to build a ‘clap’ sound module that’s not a one on one re-creation of the 808 or 909 and has a bit more control. I liked the sound on the Vermona DRM, so something like that, but not quite the same.

Here are some dry recordings of the module (only using the build in noise source): Plenty of designs and schematics out there, most famously the 909 and 808, but plenty of others as well. Synthesising a clap sounds seems to happen more or less in the same way in various implementations, starting off with a noise source.

I used the excellent schematic from Hexinverter of their 909 based noise source. Why, because it looked cool to build and I wanted to know if there’s anything special about it. Turns out, not that much. It has a slight roll off at the higher frequencies which is noticeable, but there is very little difference between using this noise source or e.g. a Doepfer A-118. This design is a bit high on part count but production cost isn’t high on my priority list. I think it can easily be replaced by a simpler noise source using less components and doesn’t need obsolete IC’s ( CD4006 – although they still can easily be obtained you’ll never know how long that’s still going to be the case. ) Only using an internal noise source felt a bit restrictive so I’ve added a patch point so you can patch in any signal you like.

The most daunting task for a clap module is the envelop generator. Generally it consists of 3 short pulses followed by a longer one.  The 808 gets those pulses from it’s micro controller, but I don’t have one and even if I did I have no clue on how to go about it. Many other designs use a combination of comparators and capacitors to build those 3 pulses. The DR110* used a CD4017 decade counter for the same purpose, which isn’t that bad of an idea since I had a few of them around. It also allowed me to easily modify the timing between the pulses, a feature I really wanted. So I went with the CD4017 to count to 3… well 4 actually.

I was thinking about a VCA and the various ways to implement one. In the end I decided life is way too short to try and get those pesky VCA circuits working as intended so I went with the excellent V2164 IC from Coolaudio. It’s a re-issue of the SSM2164 used in a wide variety of old analogue synths. Not the cheapest solution by far, but I do value my sanity – or what’s left of it – quite a bit and it makes implementing a VCA pretty easy. Audio IN, CV and Audio Out. That’s it.

I also added a ‘reverb’ circuit, as found in lots of clap sound generators. Calling it a reverb is a bit of a marketing stretch since it’s just a 2nd, longer decay with some filtered noise, but it does sound convincingly enough like a reverb if tuned and shaped right. This is version one of the schematic, use at your own risk.

*The DR110 uses its microcontroller to generate the pulses, not a 4017 counter. There is a schematic out there that claims to be a DR110 clone which uses a 4017 IC to generate the triggers, that’s where I got the reference. Not that it matters much, but just for the sake of correctness.